This story touched me deeply this morning, and angered me. It was hard for me to leave for work without posting about it but I had an appointment and a job to do. And by the way, this has to get the Photo of the Week award. 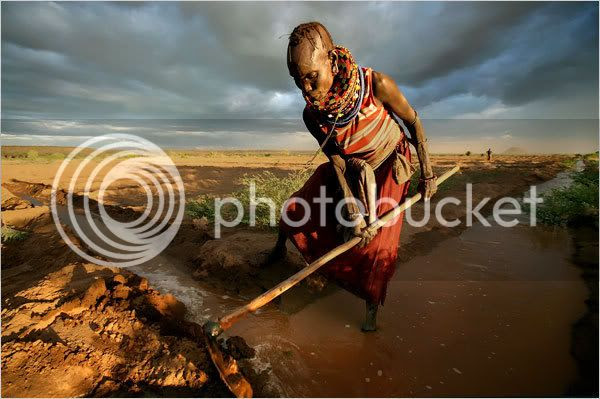 The Bush administration, with odd-bedfellows support from liberal Democrats, has called for allowing the purchase of some food in poor countries to quicken responses to emergencies.

Families participating in an American-financed irrigation project from 2002 to 2006 were promised payment in corn for clearing the land and digging canals. The Kenyan government objected to the importation of American corn because the country was awash in a bumper harvest that had caused corn prices to plunge.

The result: American officials, prohibited by law from buying the corn locally, could not deliver it. As the impoverished families waited in vain for sustenance from the American heartland, malnutrition among the youngest children worsened and five people died of hunger-related causes.

Most farmers I've known were, or claimed to be, Christians. However, the opposition behind this are hardly Christlike.

Across Africa, the United States is more likely to give people a fish — caught in America — that feeds them for a day than to teach them to fish for themselves. Since last year, for example, the United States has donated $136 million worth of American food to feed the hungry in Kenya, but spent $36 million on agricultural projects to help Kenyan farmers grow and earn more.

And even that small budget for long-term projects in Kenya is expected to dwindle.

Pay close attention to all of the dollar figures quoted in this article, which I am emphasizing in bold and/or red.

The Senate Agriculture Committee chairman, Tom Harkin, Democrat of Iowa, where growers and landowners got $1.58 billion in corn subsidies in 2005, is advocating a $25 million pilot program to test buying food in poor countries for both emergency and long-term aid.

Even that modest proposal is meeting stiff resistance from farm state legislators. The House Agriculture Committee’s version of the farm bill includes no such pilot. The committee chairman, Collin C. Peterson, Democrat of Minnesota, said of his members,` “They’re still of the mode that this should be American products we’re using our tax dollars to provide them.”

Mr. Peterson’s district got $367 million in corn subsidies in 2005, according to government data analyzed by the Environmental Working Group, a nonprofit research organization.

It's really obnoxious to me that a wealthy nation such as America (apparently filled with selfish spoiled brats who put their own financial gain ahead of small compromises to aid those in dire need) can display such brazen disregard for the have-nots of the world.

It's sickening. How in the hell do we explain our broken promises, and do we even care?