She died today, sometime early this morning, behind the washing machine in true cat fashion: passing on in the most inconvenient spot imaginable and making daddy do more work. 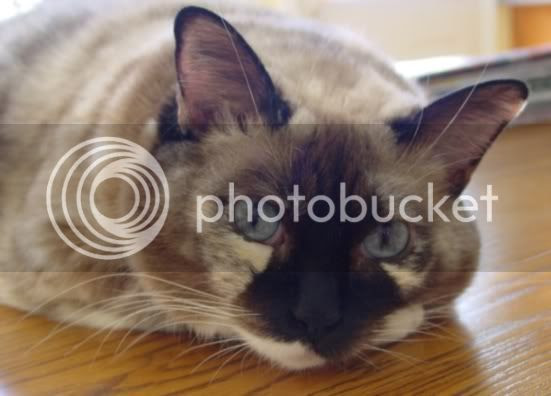 As txrad was leaving for work this morning he said, "Samantha is behind the washing machine and I don't know if she's alive or dead."

So I paced around the house today moving furniture out of the two rooms where we need to rip out the rest of the carpet trying not to disturb my old girl. By 11:00 I was pretty sure she had died, but throughout the day I kept thinking I was seeing her out of the corner of my eye, or hearing her stirring about. And I kept thinking "please don't get up and stumble into the kitchen howling."

I absolutely could not take another trip to the vet with a cat needing to be put to sleep. That is an experience I've been through once with Jezebel and once is enough. There's just something about having that final moment with a living cat, complete with loving eye contact, and a minute later she's gone. It's terrible, and the decision to do it rests of me.

I'm very relieved Samantha chose to pass on here in our home. That's the way I wanted it and I know that's the way she wanted it. But I'll still miss her. She was our first cat together as a couple. She was born in Los Angeles and in the early days I referred to her as my LA girl who is a Texas girl now.

The picture I'm using in this post was taken in November, 2003 and I have it framed in my bedroom. That was when she was still fat and for a couple of years at least she was so overweight she could not clean her butt. I had that chore.

At 4:00pm today she was buried in our back yard, between two large boulders, in a shallow grave covered with smaller rocks. It's not easy digging a hole after 5 or 6 inches of rain. That girl was really good at making me work.

So, let the wake begin. I had already decided my LA girl was going to get this video as her send off.