The New York Times was full of interesting stuff today.
Gang Fights in Prison Injure 22 and Kill One

That's right here in the lovely state of Texas. Something seems horribly wrong if you can't control gang activity IN a prison.

A federal prison in Texas erupted in violence early Friday when two gang-related fights broke out almost simultaneously in facing housing units. One inmate was killed, and 22 were injured, officials said.

It was the second outbreak of fighting in a federal lockup in Texas in three weeks.

The dead inmate was identified as Servando Rodríguez, 38, an illegal immigrant serving 54 months for marijuana and parole violations.

That's 4 1/2 years for marijuana and whatever the parole violations where. Probably marijuana-related. I guess he won't have to finish his sentence. Now there's an open bunk for the next marijuana conviction.

In other news, keep an eye on your automotive underbelly, especially if you drive a large SUV. Catalytic converters are becoming hot items in our new economic reality, thanks to trace amounts of platinum.

Inside the lobby of the New Windy City Mufflers and Brakes shop, Mr. Fernandez said he had heard a rumor that catalytic converters had suddenly become the rage on the black market here, but he did not believe it until his went missing on a well-lighted North Side street.

Theft of scrap metals like copper and aluminum has been common here and across the country for years, fueled by rising construction costs and the building boom in China. But now thieves have found an easy payday from the upper echelon of the periodic table. It seems there may not be an easier place to score some platinum than under the hood of a car.

People who may have thought their lives had nothing to do with the booming commodities market are finding out the hard way where their connection is — in their car’s exhaust system.

The catalytic converter is made with trace amounts of platinum, palladium and rhodium, which speed chemical reactions and help clean emissions at very high temperatures. Selling stolen converters to scrap yards or recyclers, a thief can net a couple of hundred dollars apiece.

None of this may matter in the long run though. When a giant particle accelerator near Geneva, Switzerland starts smashing protons this summer, some scientists fear the earth may be sucked into a black hole.

But Walter L. Wagner and Luis Sancho contend that scientists at the European Center for Nuclear Research, or CERN, have played down the chances that the collider could produce, among other horrors, a tiny black hole, which, they say, could eat the Earth. Or it could spit out something called a “strangelet” that would convert our planet to a shrunken dense dead lump of something called “strange matter.” Their suit also says CERN has failed to provide an environmental impact statement as required under the National Environmental Policy Act.

That would certainly take care of my daily frustrations: the lawn mower maintenance, the roof replacement, garden pests intent on destroying our tomato crop, and of course the credit card bills and other financial woes would get sucked into the hole along with everything else. And an early end to a nasty presidential campaign with no winners needed.

Fire this baby up! 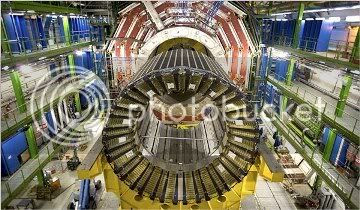 In a worst case scenario, it wouldn't even be important that I give a photo credit to Valerio Mezzanotti for The New York Times. When we're all possibly getting a free ride to the other end of the universe, who cares?

Crossposted at Big Brass Blog
Post Author: Friðvin at 10:57 AM