It goes without saying that our economy is tanking when teenagers are having trouble getting fast-food jobs because adults need the jobs. From Sunday's NY Times was a lengthy business article about the dire employment picture and a trend in which many are having to take jobs paying half as much as their previous job -- if they are lucky enough to find one.

And little did I know, many employers require a credit check. If you fail that, you don't get the job.

For more than a decade, Dorothy Thomas, 49, an African-American and a mother of two, worked as an administrative assistant at various health care centers in Northern California. In her last job, she earned $16 an hour, as well as benefits, she said.

It was never enough to pay all the bills, she said, so she made choices, paying this one, not paying that one, all the while focused on one mission: getting her two daughters through school. She lived in apartments in better neighborhoods, paying more rent than she could afford to ensure that her girls attended better schools.

“I truly bought into the idea that education is the way out of poverty,” Ms. Thomas says. One daughter received a master’s degree in education and is a teacher in Hawaii, she says, and the other is still in college.

But the bills for Ms. Thomas are still coming due. She lost her car in November 2005 after she fell behind on the payments. Unable to drive to work, she lost her job. Since then, she has been unable to find a job.

Several times, she has landed interviews that seemed likely to bring offers, but the jobs required a credit check — a test she cannot pass.

“My credit is just so in shambles,” she told a classroom full of people gathered for a credit counseling session at the Private Industry Council. “More and more jobs are checking your credit. They’re saying that credit is a reflection of your character.”

Great, kick 'em when they're down and out. 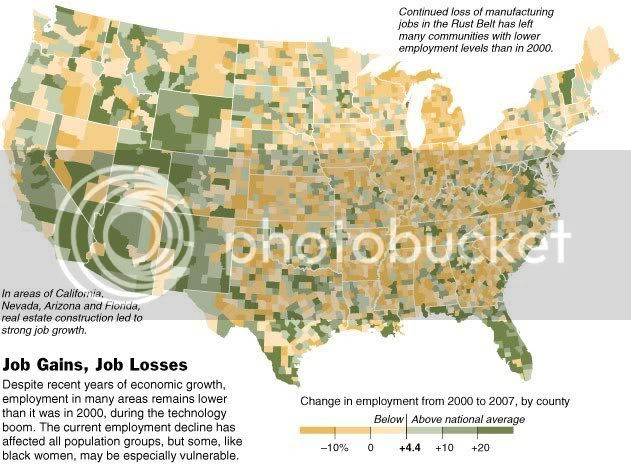 Email ThisBlogThis!Share to TwitterShare to FacebookShare to Pinterest
Labels: Economy, US