What's Missing On This Blog?

My ranting contribution to the March 19 Iraq War Blogswarm? 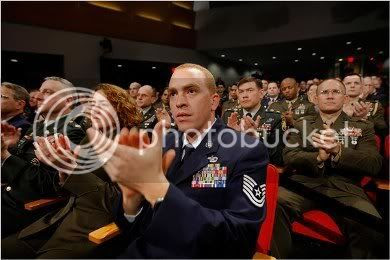 I'm not sure I have it in me. I've been angry about this war for 5 years already. I've blogged about my anger for about 22 months off and on. The American people have spoken -- once by electing that fucking asshole in the White House to a second term when he never deserved a first, and once by giving the Democrats a narrow control over Congress which by my estimation has accomplished not one damn thing. Sure, the people have been polled and they overwhelmingly are against the war but who gives a shit about poll numbers? Not the president. And not Dick.

And in just over 7 months we'll be going to the polls again to select the leader of our country for the next four years in what should be a landslide blowout against the Republicans, but may in fact be another tight race if current polls can be trusted.

Americans seem more concerned about the economy right now than they are about Iraq. I'm not saying that's wrong. We should be more concerned about the economy because Iraq should never have been an issue in the first place because the war never should have happened. And I've yet to hear very many Americans asking themselves how the cost of this war has impacted our economy, directly or indirectly.

Meanwhile, Bush just keeps pounding the same message to the same favorable audiences over and over, and nothing changes. No accountability, no impeachment, nothing.

“Five years into this battle, there is an understandable debate over whether the war was worth fighting, whether the fight is worth winning, and whether we can win it,” he said. “The answers are clear to me. Removing Saddam Hussein from power was the right decision, and this is a fight that America can and must win.”

This protest against the war and the appropriate level of anger should not be confined to the "liberal" bloggers. Honestly, I feel thoroughly pissed off that after five long fucking years of this insane bullshit, we're still the ones demanding an end to it. Five years into this with no end in sight, 4,000 soldiers dead, many tens of thousands more wounded, hundreds of thousands of innocent Iraqis dead or wounded with millions of lives disrupted and displaced, countless lies of the Bush administration, trillions of dollars squandered or slated to be, there should be tens of millions of Americans out in the streets in an uproar.

Frankly, I find myself in "shock and awe" at American apathy. We apparently cannot even comprehend the cost although we will without a doubt feel it, and soon.

Five years in, the Pentagon tags the cost of the Iraq war at roughly $600 billion and counting. Joseph E. Stiglitz, a Nobel Prize-winning economist and critic of the war, pegs the long-term cost at more than $4 trillion.

Congressional Democrats fiercely criticize the White House over war expenditures. But it is virtually certain that the Democrats will provide tens of billions more in a military spending bill next month. Some Democrats are even arguing against attaching strings, like a deadline for withdrawal, saying the tactic will fail as it has in the past.

Emphasis on "and counting." These spineless fucks are paid to represent us. When will we hold them accountable?

Time is ticking and every ten seconds of this insanity costs us the average income of an American for a year, give or take a few seconds. With that in mind, I'm not sure just what it takes to get the average American angry enough in large enough numbers to bring about some change.

Until then, I have a prayer.

That's not asking for much under the circumstances.
Post Author: Friðvin at 4:23 PM