Another Icon Has Died 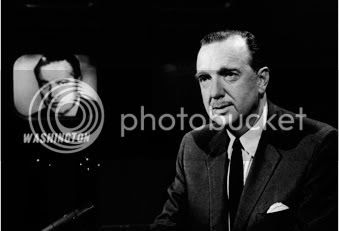 He was so widely known that in Sweden anchormen were once called Cronkiters.

Yet he was a reluctant star. He was genuinely perplexed when people rushed to see him rather than the politicians he was covering, and even more astonished by the repeated suggestions that he run for office himself. He saw himself as an old-fashioned newsman — his title was managing editor of the “CBS Evening News” — and so did his audience.

Those were the good ole days. Minus the racism and shit. The beginnings of the media fame curse. And Reagan should have had similar "astonishment." Not that Reagan was a "newsman," mind you.

That would have solved many of our current day problems.
Post Author: Friðvin at 7:57 PM