Can we please do something to stop this insane practice of texting while driving? The time is way overdue to examine this phenomenon and get serious about reducing the occurrences. And even cellphone use should be mandated by law to be hands-free while driving a vehicle, at the very least.

Mr. Hill, a diligent student with a reputation for helping neighbors, also took pride in his clean driving record. “Not a speeding ticket, not a fender bender, nothing,” he said.

Until last Sept. 3. Mr. Hill, then 20, left the parking lot of a Goodwill store where he had spotted a dresser he thought might interest a neighbor. He dialed her to pass along news of the find.

Mr. Hill was so engrossed in the call that he ran a red light and didn’t notice Linda Doyle’s small sport utility vehicle until the last second. He hit her going 45 miles per hour. She was pronounced dead shortly after.

Later, a policeman asked Mr. Hill what color the light had been. “I never saw it,” he answered.

If these people who crash their cars while using a device simply smash into a tree or a concrete barrier, I probably would not be as outraged. People who do stupid things and take risks will pay the price when something goes wrong. I don't think we need a law against cellphone use or texting while jumping from a plane with a parachute, for instance. The only person likely to die in this situation is the person jumping, and it would probably have nothing to do with cellphone use. And wind noise might be a problem, but I digress.

A driver distracted by texting or other cellphone use could be as much a threat to the rest of us as an intoxicated driver. [Emphasis mine.]

Extensive research shows the dangers of distracted driving. Studies say that drivers using phones are four times as likely to cause a crash as other drivers, and the likelihood that they will crash is equal to that of someone with a .08 percent blood alcohol level, the point at which drivers are generally considered intoxicated. Research also shows that hands-free devices do not eliminate the risks, and may worsen them by suggesting that the behavior is safe.

A 2003 Harvard study estimated that cellphone distractions caused 2,600 traffic deaths every year, and 330,000 accidents that result in moderate or severe injuries.

Yet Americans have largely ignored that research. Instead, they increasingly use phones, navigation devices and even laptops to turn their cars into mobile offices, chat rooms and entertainment centers, making roads more dangerous.

So, during the time since the 9/11 attacks, we've lost possibly 20,000 or more innocent lives, and possibly 2 million+ injuries, and we've done almost nothing to prevent the carnage. By contrast, we lost a fraction of that number in the 9/11 attacks and allowed a cowboy president and Congress to basically run roughshod over the US Constitution.

Police in almost half of all states make no attempt to gather data on the problem. They are not required to ask drivers who cause accidents whether they were distracted by a phone or other device. Even when officers do ask, some drivers are not forthcoming.

Where the hell are our priorities?

Make note of the research mentioned above regarding hands-free devices. I suspect it depends on the person, the nature of the call, and traffic conditions. But without a doubt, there are plenty of situations where that is equally unsafe.

I think about my own phone conversations while I'm sitting at my desk in my home, or on the sofa. I notice two patterns develop: either I'm observing something going on around me and the person speaking has uttered an incomprehensible sentence or two, or I'm paying close attention to the speaker and engaging in conversation myself, and the world beyond the tip of my nose becomes a blur.

Even when I'm in the car with txrad, I occasionally find conversation to be overly-distracting when I'm in heavy traffic. I often need my complete attention focused on the cars around me, being aware of the person tail-gating me, or the idiot who is about to dart across three lanes of traffic directly in front of me to make the exit.

Here's my suggestion. Before sending a text message or having a conversation while driving a vehicle, ask yourself: is this text message or call really worth the possibility of a hospital emergency room visit? Is it worth possibly killing someone or being killed? Is it even worth the possibility of a fender-bender with the resulting hassles of auto repairs and insurance issues? Are you really that hooked on it?

Scientists are grappling, too, with perhaps the broadest question hanging over the phenomenon of distracted driving: Why do people, knowing the risk, continue to talk while driving? The answer, they say, is partly the intense social pressures to stay in touch and always be available to friends and colleagues. And there also is the neurological response of multitaskers. They show signs of addiction — to their gadgets.

John Ratey, an associate professor of psychiatry at Harvard University and a specialist on the science of attention, explained that when people use digital devices, they get a quick burst of adrenaline, “a dopamine squirt.” Without it, people grow bored with simpler activities like driving. Mr. Ratey said the modern brain is being rewired to crave stimulation, a condition he calls acquired attention deficit disorder.

“We need that constant pizzazz, the reward, the intensity,” he said. He largely dismisses the argument that people need the time in the car to be productive. “The justification for doing work is just that — a justification to be engaged,” he said.

Auto accidents will continue to happen and innocent people will continue to die. But we need to move beyond categorizing as an accident the blatantly careless selfish obsession with new freedoms to "stay connected" at all times and in all situations.

In a world where one or two seconds can mean the difference between life and death, there are important questions. The person who rammed into this vehicle should have asked them. The mother who was driving this car would still be alive. 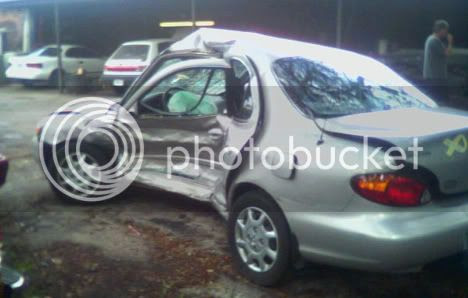 Take a look at the Patchwork of Policies compiled by the New York Times. There are only 14 states with a total ban on texting while driving!

If you feel you simply must text while being in motion, then I suggest you take a walk. At least the damage you may cause will only be to yourself.
Post Author: Friðvin at 6:53 AM