Pity da menz. Because dim menz can't be havin' da wimminz all runnin' around abortin' babies and shit not havin' permissions from Da Man, ya know. How dare them bitchez actin' like they own their bods -- Da Man does, ya know! It's right 'cher da BIBLE.

If this asshole had he way, women would need to get permission from the biological father before being allowed to have an abortion.

And what if the woman isn't sure?

In cases where the identity of the father is unknown, women would be required to submit a list of possible fathers. The physician would be forced to conduct a paternity test from the provided list and then seek paternal permission to abort. Claiming to not know the father's identity is not a viable excuse, according to the proposed legislation.

How's that for being worthy of the Asshole of the Day Award? 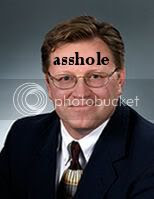 So otherwise, a rape survivor would need to find her rapist and see if he's willing to sign off on the whole deal. Jesus H. Christ.

Yes, Jesus H. Fucking Christ on a cracker. How in the hell do these pricks get elected to public office?

That is not a rhetorical question.
Post Author: Friðvin at 6:17 PM