Tired of Shootin' Moose: The Virtual Outhouse Is Open!

The Good News: Sarah Palin is resigning as Governor of Alaska at the end of this month, and even before completing her first term in office.

The Bad News: We may be seeing a lot more of her down here in the lower 48 where life is apparently more to her liking. For one thing, they don't have a Neiman-Marcus, a Bloomingdales, or a Saks Fifth Avenue in Alaska.

By leaving office early, Ms. Palin, a 45-year-old mother of five, will be able to travel around the country more freely and not be constrained by the duties and responsibilities of being a governor.

And I guess she's just tired of sittin' around with nothin' much to do except look at Russia.

So as a tribute to Palin and her decision, I'm resurrecting a Virtual Outhouse from last year for an encore. 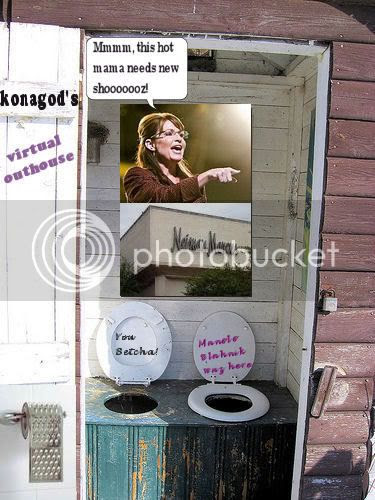