Remember that absurdly ridiculous "Boyfriend Replacement Arm" I got in the mail back in June?

I took twig up on that offer! I don't have a lot of things cluttering up my house and yet, what I do have is too much clutter (call me minimalist) so I wanted this promotional gimmick gone, and I would have felt some guilt throwing it in the trash.

I boxed it back up in the original box in which it was shipped to me which was literally almost as big as a coffin. txrad took it to the UPS store for shipping.

When he got home he said, "the box is still in the car." I had estimated the shipping cost at around $13 based on a visit to the UPS web site, but because the box was so large, there was a surcharge which made the shipping cost over $40! I knew twig wouldn't be too happy about that!

It was another week before I got around to locating a smaller box, stuffing the boyfriend into it, and getting it shipped off. This time the shipping cost was $13.10 which was a bit more reasonable.

Wednesday night I got an email from twig with these two photos. 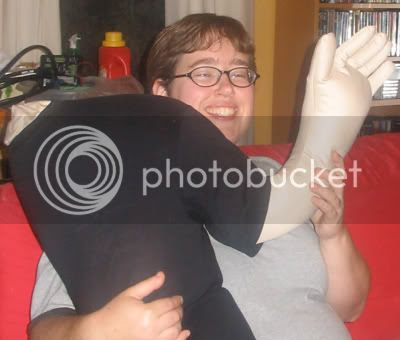 This is the best part about blogging: meeting new people and doing something to bring joy in their lives! twig and The Thing seem to be hitting it off nicely!

Ummm, kona be lovin' those wood floors!
And now there's another hand around with which to pet Aramis the cat!
Post Author: Friðvin at 11:56 AM