Maybe if I was 20 and in college I'd think Everclear was just the coolest thing. It's not. 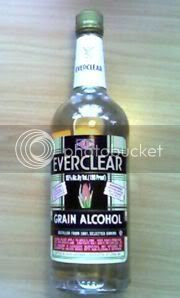 And as long as I live, I prefer to never have this stuff pass my lips again. I particularly dislike restaurants and bars which lace a margarita with this shit. And there are a number of those establishments in the Austin area. I stumbled upon one last night.

Now I can't say with 100% certainty they used this alcohol, but I'd do a double or nothing bet on my next paycheck. It's not listed in the ingredients in the below link, but that means nothing. I've had a lot of strong margaritas and plenty that were not so strong. And I've walked out of restaurants after having two margaritas and feeling a really good buzz. But I've never had 2 margaritas and felt intoxicated, unless there was something besides the usual acceptable ingredients involved. Maybe the Espolon Silver is just nasty shit, but I'm sticking with my original belief.

Yesterday after work, we met up with a local NBC representative for drinks and appetizers. Since Matt’s El Rancho (say it with an excessive rolling R; that's fun and it's how our local radio station does it) is a Mexican food establishment, I wasn't going to have anything but a margarita or two. Our host who was picking up the tab was drinking white wine. Smart woman.

She had ordered a few appetizers as well. I started with some chips and salsa which was great. Then the allure of the queso with the dollop of guacamole got the best of me. I sunk my chip right in the middle of it and assumed what I saw as I removed the chip was perhaps bean dip. That was the wrong assumption for a vegetarian to make. Rather than make a scene in front of someone I was meeting for the first time, I just swallowed. After all, there was queso involved and it's not like I could just easily spit out a piece of meat.

The nachos were tasty but I suspect their beans have some meat base. This restaurant is probably great for carnivores. It's certainly a local favorite.

After the first margarita I was feeling quite a punch. I ordered another. And I'm glad I stopped after that one even though the waitress was eagerly promoting another round. That's rather irresponsible in my opinion, knowing the strength of those drinks.

We came home and continued drinking tequila but overall, I drank considerably less than I normally would on a Friday night. I woke up this morning feeling like I'd consumed an entire bottle of tequila and having some wicked alcohol aftertaste and cottonmouth action going on. That's not normal. And I had a headache. THAT'S not normal because we only drink 100% blue agave tequila and I rarely have headaches until I drink a LOT of tequila and don't eat dinner.

And I felt somewhat unstable for the bulk of the day. I took a nap and even had a spiraling feeling in my dream state.

Tonight I'm drinking beer and tequila in an attempt to cleanse my system of that nasty Everclear. In the future, if I'm in an unfamiliar restaurant, I will ask what's in the margaritas before ordering. This was an unpleasant shock I do not wish to see repeated. Ever. Clear?
Post Author: Friðvin at 6:35 PM

Email ThisBlogThis!Share to TwitterShare to FacebookShare to Pinterest
Labels: Alcohol