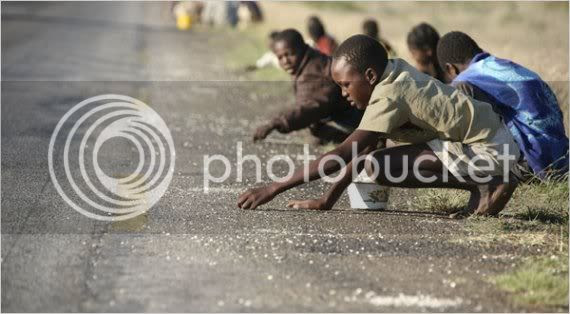 Photo credit: Tsvangirayi Mukwazhi/Associated Press
This is a scene from Zimbabwe of children gathering corn that spilled from a truck.

In the dirt lanes of Chitungwiza, the Mugarwes, a family of firewood hawkers, bake a loaf of bread, their only meal, with 11 slices for the six of them. All devour two slices except the youngest, age 2. He gets just one.

And on the tiny farms here in the region of Mashonaland, once a breadbasket for all of southern Africa, destitute villagers pull the shells off wriggling crickets and beetles, then toss what is left in a hot pan. “If you get that, you have a meal,” said Standford Nhira, a spectrally thin farmer whose rib cage is etched on his chest and whose socks have collapsed around his sticklike ankles.

Still dominated after nearly three decades by their authoritarian president, Robert Mugabe, Zimbabweans are now enduring their seventh straight year of hunger. This largely man-made crisis, occasionally worsened by drought and erratic rains, has been brought on by catastrophic agricultural policies, sweeping economic collapse and a ruling party that has used farmland and food as weapons in its ruthless — and so far successful — quest to hang on to power.

A survey by the UN World Food Program reported a shocking 60% of people had consumed only one meal the previous day, up from 13 percent last year. Those who had eaten nothing the previous day accounts for 12% of the population.

All of this brought about by an asshole's quest for power. Mugabe must go.
Post Author: Friðvin at 7:39 AM

Email ThisBlogThis!Share to TwitterShare to FacebookShare to Pinterest
Labels: Africa, Haves vs. Have Nots, Tyranny