This is an odd coincidence. I was just reminiscing a few days ago about Socks, the Clinton's White House cat during the 1990s, and was wondering how long Socks had been dead.

Back in the 90s I picked up 3 souvenir postcards of Socks while in Arkansas and then never could bring myself to send them to anyone. I still have them in a drawer (go ahead, call me obsessive) and here's a scan of one. 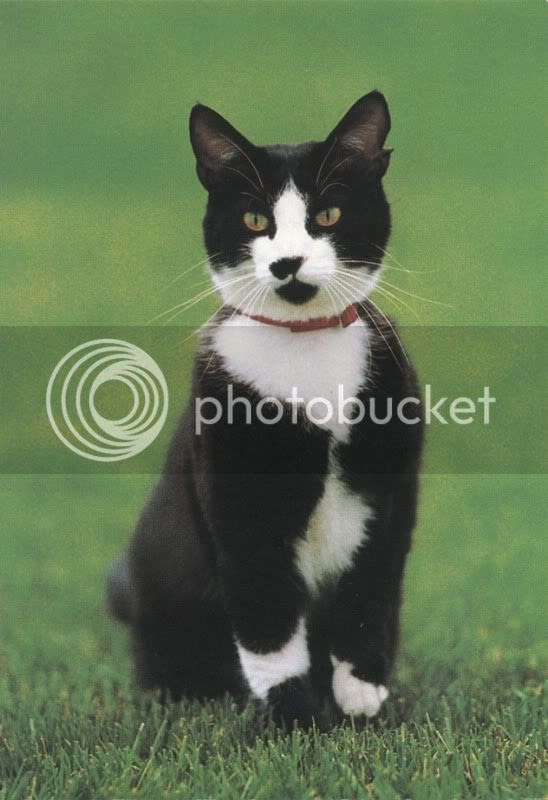 Socks is not dead yet. He still lives with Betty Currie who is currently volunteering in the Barack Obama transition to the White House.

Since leaving the White House, Ms. Currie, 69, has shied from publicity and kept a low profile in Hollywood, Md., where she lives with her husband, Bob, and Socks, the presidential cat, which she took with her after Mr. Clinton left office.

Ms. Currie has kept in touch with the Clintons and donated $750 to Mrs. Clinton’s campaign for the Democratic presidential nomination this year. When she ran into Mrs. Clinton last spring, she told a writer from Southern Maryland Newspapers, Mrs. Clinton asked about Socks.

There is a discrepancy between the age reported here and what appears on the Wiki entry linked at the beginning of this post which would date Socks at 17 going on 18.

In either case, I'm very surprised and happy to know that Socks is alive and will hopefully make it through January. If so, he will have lived through four administrations. Amazing.
Post Author: Friðvin at 8:43 AM