Do Not Try This At Home

I do not understand why every day has to be so frustrating. Work alone is enough.

But today Tater Tot vomited on the uncovered polyester comforter. We took it outside and txrad scraped off the chunks of cat food. Then he put it in the washing machine which is quite a challenge because of the bulk of this thing. 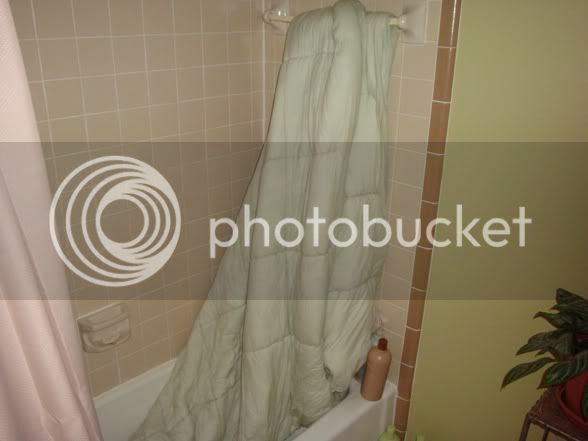 As the washing machine was filling, water was ricocheting from the comforter under the lid and outside the machine. Then as it spun it apparently spun more water outside. I walked into the kitchen and exclaimed, "What the fuck is all this water on my new travertine tiles?"

txrad started mopping it up with towels. I was moving the washer away from the wall so he could mop up water under it. And with all this, the cat vomit stain didn't come out of the comforter. Then, without my approval, he took the comforter all the way back to the master bath and began washing it in the tub.

It soaks up water, but doesn't release it very easily. This is why we have washing machines, people! They spin the water out!

So after a frustrating day at work I went to take a shower and found about 40 pounds of wet comforter sitting in the tub. Standing buck naked I'm walking across the comforter in the tub trying to squeeze out enough water so I could transport it back to the utility room. No go. I was not going to take that dripping wet thing across carpet and travertine. So I moved it into the sink for the time it took me to shower, then moved it back to the tub and allowed it to hang from the towel rack.

It will not be dry by morning. No way in hell. But maybe enough water can be squeezed out of the bottom to take it to the dryer.

About the time I had returned from my shower to complain to txrad about his madness, Tater Tot threw up again on my new floor.

I give up. It is Monday. Definitely.

txrad: "You'll never see a cat vomit stain on these floors, trust me."

konagod: "Yeah, that's the problem. I'll probably never see cat vomit on them. I'll know when I step in it."

Bottom line: I love my floors. The rest of the critters in the house need to get it together for my sake.
Post Author: Friðvin at 7:20 PM