A Clash of Technology

A few months back when txrad and I swapped desk positions I never moved the hi-fi rack over near my desk so I could use it. Not that I really need to for CDs since almost all of them are stored on that little lime green Zen player which also has a built-in FM tuner -- something I am lacking in my big rack system. 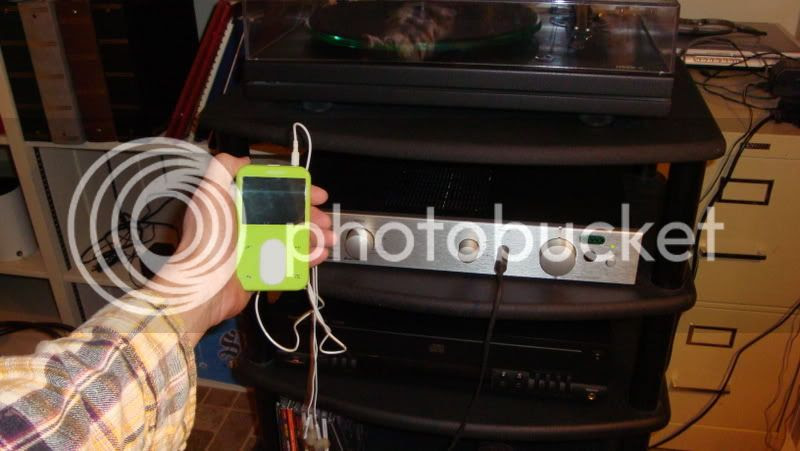 For vinyl, I need the big turntable. And that turntable cracks me up. There's no switch to adjust the speed for 33 rpm to 45 rpm. In order to do that you have to remove the glass platter and adjust the belt to a different position on a spindle. Sometimes I think I may be too lazy to be a true audiophile. I never liked 45s anyway. There's also a screw-down clamp to hold the LPs in place. Again, a bit of work just to listen to roughly 22 minutes of music before flipping it over and repeating. However, I just can't bring myself to use the Zen player unless I'm away from the hi-fi system.

I also spent much of the afternoon researching technologies which have happened while I wasn't paying much attention for the past year or so, primarily HDMI which has apparently rendered everything I own obsolete with the exception of the new Dish Network HD receiver we got recently.

Nice. Technology sure moves quickly. I'm still infatuated with my 4GB USB Smart Drive which I can wear around my neck and it weighs about as much as a plastic whistle.

This is all really cool but could we slow it down just a bit so I can actually have time to enjoy it before the next big thing rolls out?

Question of the Day

Have you bought a Blu-ray DVD player and can you tell a big difference in picture quality on your HDTV? With or without an HDMI cable?
Post Author: Friðvin at 6:16 PM