Can We Pray Ourselves Out of a Recession?

Many are willing to give it a shot apparently. 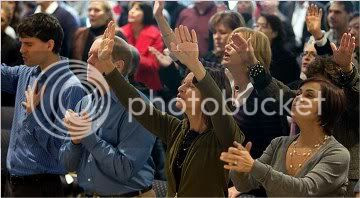 At the Life Christian Church in West Orange, N.J., prayer requests have doubled — almost all of them aimed at getting or keeping jobs.

Like evangelical churches around the country, the three churches have enjoyed steady growth over the last decade. But since September, pastors nationwide say they have seen such a burst of new interest that they find themselves contending with powerful conflicting emotions — deep empathy and quiet excitement — as they re-encounter an old piece of religious lore:

Maybe. And maybe not.

Gov. Sarah Palin's home church was badly damaged by arson, leading the governor to apologize if the fire was connected to ''undeserved negative attention'' from her failed campaign as the Republican vice presidential nominee.

Damage to the Wasilla Bible Church was estimated at $1 million, authorities said Saturday.