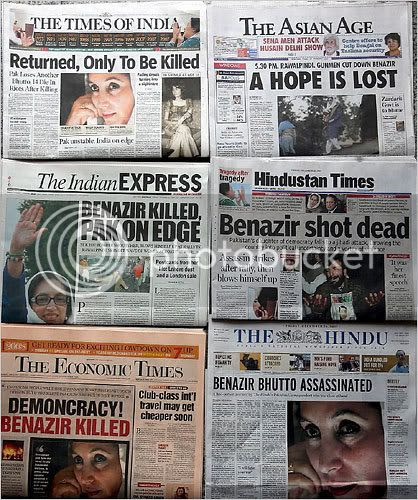 Pakistan has had lots of unrest in the past 24 hours and there remains much uncertainty about how things will progress in the near future. WaPo

"If there's a lot more violence, then it's possible the whole democratic process will be derailed," political analyst Hasan-Askari Rizvi said.

Other observers saw glimmers of conciliation. "This can turn into anarchy," said Talat Masood, a retired general and political analyst. "Or it can turn into something Benazir Bhutto could not achieve in life but may achieve in death. It could provide the momentum needed for a return to the rule of law and democracy. It could go either way."

The News Analysis piece by Helene Cooper and Steven Lee Myers in the NY Times is far from optimistic.

The assassination of Benazir Bhutto on Thursday left in ruins the delicate diplomatic effort the Bush administration had pursued in the past year to reconcile Pakistan’s deeply divided political factions. Now it is scrambling to sort through ever more limited options, as American influence on Pakistan’s internal affairs continues to decline.

The assassination highlighted, in spectacular fashion, the failure of two of President Bush’s main objectives in the region: his quest to bring democracy to the Muslim world, and his drive to force out the Islamist militants who have hung on tenaciously in Pakistan, the nuclear-armed state considered ground zero in President Bush’s fight against terrorism, despite the administration’s long-running effort to root out Al Qaeda from the Pakistan-Afghanistan border.

I just hope we don't start 2008 with yet another out-of-control crisis in the region. However, optimism is difficult to maintain these days.
Post Author: Friðvin at 6:45 AM