Ever since 9/11 I get a tad anxious whenever there's a incident in America involving the loss of human life, whether it's 9 people or 3,000.

The last great days of flying for me were when I lived in Los Angeles. Being able to hop out of the car, zip through the terminal and security to get on a flight for Vegas in about 15-20 minutes is a fond memory which will probably never be repeated.

The pleasurable air travel experience has been eclipsed with lengthy security procedures, intense searches, and absurd restrictions on what can and cannot be carried aboard an aircraft.

I can't help but wonder, in the wake of the Omaha mall shooting, when airport-style security procedures are put in place in order to go shopping. I am also curious to see what other bloggers are saying about the incident, on both ends of the political spectrum, and they are apparently saying quite a bit. 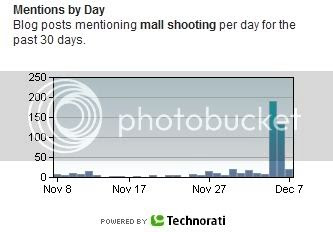 Malls are not my favorite place to shop by any stretch of the imagination. Consolidation in the retailing industry, coupled with a few corporations who own most of the malls in America, have completely eradicated anything resembling a unique shopping experience. By and large, the mall near us has most of the same stores and the same merchandise as the malls in San Antonio, Atlanta, Seattle, Memphis, and Pittsburgh. If you've seen one you've probably seen them all.

I do occasionally visit a mall here in Austin. And I'm usually ready to leave after about 10-15 minutes. These privately-owned replacements for America's public downtowns are an eyesore in comparison.

Needless to say, it wouldn't take much to wean me completely off the mall. A heavy presence of armed guards is not exactly what I like to see while shopping, nor is a wait at the entrance involving metal detectors and pat-downs likely to encourage me to go for a stroll and behave like a good American consumer.

It will be a sad day for this country if we feel like we need to live in a police state in order to have security, but I won't be a bit surprised if that's not the direction in which we are heading.

Here's what some other bloggers are advocating. Many on the right are pushing for malls to allow citizens to bring their concealed weapons into the malls for protection.

...mass shootings like this have been stopped by armed citizens on more than one occasion.

In what universe is herding hundreds or thousands of unarmed people into a building and then putting a sign up advertising the fact that no one inside can protect themselves not going to attract lunatics who want to kill as many people as possible? In what universe is this a good idea?

Somehow the image of dozens if not hundreds of shoppers in a mall packing heat gives me the willies. And what if a gunman does go on a rampage for whatever reason. The electronics store is sold out of Wii. A store clerk goes down. A shootout ensues involving 3 or 4 other shoppers OK Coral style.

If these shoppers are professional marksmen and can hit a moving target and prevent additional shootings, I suppose that's a good thing. But given that we have no way of measuring that, the odds are far more likely we're going to have a wild & crazy free-for-all at the mall.

The police reacted very quickly in Omaha--six minutes, but you can kill a lot of people in six minutes. Its notable that the similar incident in Salt Lake City earlier this year features the actions of an armed, off-duty police officer who undoubtedly saved many lives by simply pinning down Suleiman Talovic. I'm not much of a gun enthusiast, but I'm beginning to think it may a civic duty to go to the mall armed.

In that case, I suppose my malling days would come to an abrupt end. I'm not that desperate for Tommy Hilfiger shit, and I can browse the Abercrombie & Fitch models on the internet, thank you very much.

From The Anti-Idiotarian Rottweiler:

The civic value of law-abiding citizens bearing arms isn’t in “we need somebody there to return fire”, although that certainly is a bonus if the situation drags out for a while. It’s in deterrence. Because somebody in such a place just might be carrying, and they just might be right next to you when you pull your rifle out of your duffel bag, or whichever method you’ve decided to use in your sick, deranged, criminal mind. And then your “blaze of glory” will suddenly turn into a hollowpoint unceremoniously planted between your beady, piggy eyes before you even get a chance to take aim.

Remember: Most of those notorious nutcases want to be noticed, they long for their deaths to “mean something.” If there’s one thing they don’t want, it’s to be executed on the spot by a law-abiding, gun-toting civilian like the common criminals that they are.

Gee, now the mall is REALLY sounding like a fun, safe and relaxing place to hang out for an afternoon! I could go on and on with the linky links but you get the picture.

In my search for solutions to reduce or eliminate these tragic events, I'm finding overwhelming support for gun-toting citizens, and not much else.

The Brady Campaign has an interesting interactive map of gun violence in the US since 1997.

But this Reuters story suggests the Omaha mall shooting is unlikely to have any impact on gun laws in the US.

A Pennsylvania state representative who last month helped defeat a proposal to limit hand gun purchases to one per person per month said he would support tougher sentencing laws for people who acquire and use illegal guns, but that law-abiding citizens should not have their rights infringed.

"I received thousands of e-mails with some of these gun control measures. Once again, it's the right to bear arms and many of our citizens don't want that right taken away," said Ron Marsico, chairman of the state House Judiciary Committee and a Republican.

Besides, he said, no law may have prevented the Omaha tragedy.

Paul Helmke, president of the Brady Campaign to Prevent Gun Violence, disagrees. He said European countries have enacted effective gun control laws and that U.S. politicians are cowed by the gun lobby as exemplified by the National Rifle Association.

"There is the mythology advanced by the gun lobby of the Wild West and the individual frontiersman single-handedly holding off the British and the Indians and the bears simultaneously," said Helmke.

"They've got politicians nervous about anything that's even got the word gun in it."

I've said many times, having a restrictive gun law may be the best the moderates and liberals can offer up, and if it actually works, fine and dandy. But we're dealing with mentally unstable people who obviously do not take the law into consideration when planning and carrying out these assaults.

I wish there were some easy and sensible solutions. But such is life. And humans are not the most peaceful species on the planet, unfortunately. But I will say this, if such violence as this continues and the end result is the demise of the shopping mall and the decentralization of shopping, I would shed no tears. It won't stop murderous carnage from taking place; that will just shift elsewhere, but having one less blight on the American landscape is a step in the right direction.
Post Author: Friðvin at 9:13 AM