Monday Is The First Day Of My Week

Having been raised in a Christian family, Sundays always had special significance as the day of worship and rest from work. "Six days shalt thou labour" was something drilled into my head from childhood. Back in the 60s and 70s, I recall my mother being very uncomfortable going into a store on Sunday to buy something.

Being a rebel at an early age, it should come as no surprise that I used to question why so many people had Saturdays off from work. Not that I would complain later in life when I moved into the workforce. But it did serve to reinforce my belief that many religious people pick and choose the scripture to which they adhere while dismissing those which are deemed inconvenient as if religion was akin to ordering à la carte from a menu.

I never understood the logic of Sundays being referred to as the first day of the week while simultaneously referred to often as the 7th day . Why should the weekend be broken in half? kona needs things logical and simple.

I guess it was a natural that I would eventually become employed in some aspect of the heathen television broadcasting industry which uses a very un-Judeo-Christian broadcast calendar in which every week starts on a Monday, and the vast majority of months begin in the last week of the prior month. 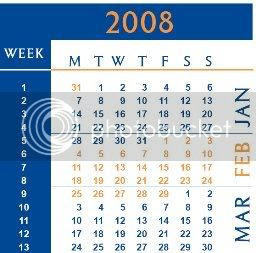 Those of us using the standard broadcast calendar are in a world of our own. 2008 begins on December 31st this year. December began on November 26. And Sunday didn't turn into Monday at midnight this morning. It was still Sunday when I woke up at 5:45, but it was Monday by the time the coffee finished brewing a few minutes after 6:00.

Email ThisBlogThis!Share to TwitterShare to FacebookShare to Pinterest
Labels: Calendars, Humor, Time, US