Question of the Day:

Had you attended the Led Zeppelin concert in London, what song would you have wanted to hear most that wasn't played, and what is your favorite of the ones which were played?

Well, for starters, I'd want my $10,000 back (if I'd been a fool to pay that much) because they didn't play but one friggin' song from my favorite album: 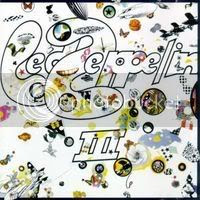 And "Kashmir" ranks right up there with "Stairway to Heaven" as one of the most overplayed Zeppelin tracks ever. But of course they had to include those for that reason. "Since I've Been Loving You" from III, was a good choice, and "Black Dog" was a fave of mine as a teen.

But this concert would have been woefully incomplete for me without at least a taste of "Out on the Tiles" or "Gallows Pole."

By the way, the New York Times article mentioned an interesting bit of trivia: This was the first time they had ever played "For Your Life" in concert. That track was from the Presence LP.
Post Author: Friðvin at 9:01 AM

Email ThisBlogThis!Share to TwitterShare to FacebookShare to Pinterest
Labels: Music