Beam Me Up, Scotty 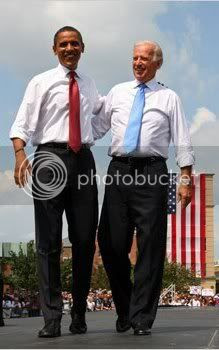 If anyone is wondering if there's some secret hidden meaning in last night's post or was I overindulging in spirits, the answer is yes.

Honestly, I lost about 50% of my enthusiasm for the upcoming elections in one afternoon. It's been 40 years since 2001: A Space Odyssey was released and I've been a fan of sci-fi for about that long. And I've been waiting for my country to become more like the bridge of the Starship Enterprise. And I'm still waiting.

Apparently, Gene Roddenberry put the Star Trek series far into the future for a reason.

Am I elated that the country has selected a man with African roots to run for president on the Democratic ticket? Indeed I am. It's refreshing and it's a change. But my joy stops right about there.

I wasn't blown out of my chair by Obama's choice in Joe Biden as his running mate. I was simply glad it wasn't one of the other two guys. A woman would certainly have signaled that he was serious about making history and charting a different course for a nation desperately in need of one. And there are plenty of men he could have chosen which would have sent the same signal. Wesley Clark comes to mind.

Instead, Obama went the conservative route by selecting a politician with solid foreign policy experience and thereby admitting it's a issue where he lacks experience. We now have a well-rounded ticket which hopefully will put a serious dent in the steam of John McCain's campaign.

But I am not excited about it. And unfortunately, there are plenty of progressives and feminists out there who are downright pissed off. And I can't really blame them. I think if I were 30 instead of 48 I'd be livid over this selection.

Personally, I don't think foreign policy is where we need the bulk of our focus right now, and my foreign policy advice to the next administration would be quite simple:

Stop meddling so much in the affairs of others, be cordial, fair and diplomatic, and don't do stupid shit. There, now that we've got foreign policy covered, let's address some of the issues here at home.

From Talk Left, here's just one of the things about Joe Biden which sickens me to my core.

As the author of two major federal crime laws that extend the availability of the death penalty to sixty additional crimes, I support capital punishment as a crime-fighting technique. But we must implement the death penalty in a way that is consistent with our values as Americans.

If we have any values as Americans, and I'm seriously having my doubts, the death penalty is not a value. And the last thing we need is another president or VP with beliefs rooted in the 1950s.

And capital punishment as a "crime-fighting technique?" Please. What an asshat view. Putting someone to death 20 years after a heinous crime is not fighting crime in any fucking way whatsofuckingever. What the death penalty does accomplish is keeping us in the same league as Iran and China and eons away from advanced nations which have abandoned it long ago. Putting more cops on the street in crime-riddled neighborhoods would be a crime-fighting technique.... assuming they are looking for real crimes being committed and not dope smokers.

Biden voted for the fence.

Well, that fence was -- the reason I voted for the fence was that was the only alternative that was there. And I voted for the fence related to drugs. A fence will stop 20 kilos of cocaine coming through that fence. It will not stop someone climbing over it or around it. And so -- but this bill has a much more reasonable provision in it. It has much -- a shorter fence. It does have the Border Patrol requirements. And it is designed not just to deal with illegals, it's designed with a serious drug trafficking problem we have."

Over his long career in politics, Biden's biggest financial supporter has been the giant credit card company MBNA, which was also one of George W. Bush's biggest donors in 2000 and 2004. His son, Hunter Biden, was hired as a management trainee at MBNA straight out of law school, and was quickly promoted to executive vice president. The younger Biden has since left MBNA to establish his own lawyer-and-lobbying firm, but still receives a $100,000 per year consulting fee from the bank, which has since been swallowed by Bank of America. In 2006, Hunter Biden was appointed by President Bush to a five-year term on the Amtrak Reform Board.

And we know Biden loves to ride Amtrak to DC. Lots of people are praising that and calling Biden "one of us."

So what? The fact that he might be an "ordinary guy" who is comfortable sitting down in a bar in Iowa counts for shit. I'm wanting to elect strong progressive leadership, not a drinking buddy. Besides, that's the same crap they said about Bush.

What I want is a frank discussion about the financial mess we're in right now. I want some honesty. And a little integrity would be nice.

Biden has cast some great votes in the senate. And he's made some huge blunders. In the end, it will be far better than Dick Cheney. But we could have done better. And I'm not excited.

If, after a four-year term, these two will move us back to the center, I'll consider it a grand accomplishment given the fact that on a scale of 1 to 10, with one being ultra-liberal and 10 being ultra-conservative, the center sits at about 7 right now.

This is all assuming the Obama/Biden team is victorious in November. It is a do-or-die election for the US.

Or as Frank Rich said in his piece titled Last Call for Change in today's New York Times:

R.I.P., “Change We Can Believe In.” The fierce urgency of the 21st century demands Change Before It’s Too Late.

At least Biden would just be the VP. And he does wear the obligatory lapel pin. 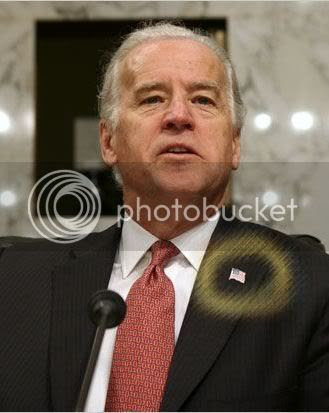 That's gotta be worth a few hundred thousand votes in Appalachia right there.
Post Author: Friðvin at 12:10 PM