I've had another exhausting and long day at work, finishing up at 7:15 tonight, then rushing to prep toppings for pizza while listening to the DNC in the background and slurping some great Australian Chardonnay. Shit, is this a Green Party convention or what??

Now I need to get a blog post up in a hurry so I can catch Hillary's not-to-be-missed speech tonight.

Drop a line and leave you comments regarding your fave moments of the night. It's going to be tough to top Kennedy last night.

But when leaving comments about Hillary's speech, please refrain from obscene and derogatory language for the sake of party unity. This would include words and phrases such as bitch, ho, cunt, heifer, whore, hag, shrill, see you next Tuesday Hillary, and the like. You will be summarily banned deleted ridiculed and promptly reported to the feminist authorities.

For those of you who missed this konagraphic the first time around, I give you a replay. 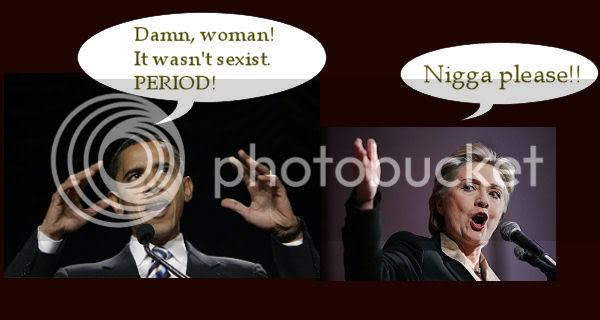 Now, now. Let's have none of that tonight. See ya'll later.
Post Author: Friðvin at 7:47 PM