One Nation Under Ignorance

I have come to the conclusion that a good number of European immigrants who settled this land were not exactly the best representatives of their gene pool.

Granted, I already wasn't in a great mood this morning after rolling to the edge of the bed and planting my feet squarely into a pile of cat vomit as I arose from my not-so-peaceful slumber.

And the sight of an 18-inch tapeworm hanging from Sweet Pea's anus was another bad start to the morning.

All that aside, walking out to the street to pick up the Sunday New York Times would ultimately prove to be the most annoying aspect of my morning.

I simply cannot grasp the concept that so many Americans are straddling the political fence between Barack Obama and John McCain. It makes no sense to me whatsoever. How many people do you know who are undecided on key issues such as abortion, gay rights, Iraq, and the economy?

The differences between the two candidates are as stark as night and day, or if you prefer, black and white.

And yet, I read quote after quote from Americans in this article who simply can't decide. Am I asking too much to expect a little common sense? It's as if there are no issues, only empty, meaningless labels such as "maverick." Just read this.

Judith France and her daughter Holly France-Kremin have been torn about their choice for president ever since Senator Hillary Rodham Clinton lost the Democratic nomination to Senator Barack Obama. Now Senator John McCain has made up their minds, but in different ways, by his surprise pick of Sarah Palin, the little-known Alaska governor, as his Republican running mate.

“It made me like McCain a little more,” said Judith France, 62, of Thornville, Ohio. “They always say he was a maverick, and this made me think, well, he really is. He went all the way to Alaska — there aren’t that many people up there, they don’t have that many electoral votes — and he picked this person. I know people will say she’s inexperienced. But she’s been a governor for 20 months. That’s more experience than Obama has.”

Judith needs to brush up on her facts. Or maybe the Republicans will seize upon that inaccurate statement and use it in campaign ads. Who knows. But Barack Obama served in the Illinois Senate from 1997 until 2004 and has been a US Senator from Illinois since 2004. Do the math. That's a hell of a lot more than 20 months. Maybe Judith doesn't know the difference between months and years.

Thank God her daughter seems to have a brain and is putting it to good use.

Ms. France-Kremin, 36, who lives nearby in Dublin, an affluent suburb of Columbus, likewise has qualms about the seasoning of Mr. Obama, a first-term United States senator after eight years as a state senator. But she also strongly favors abortion rights, and Ms. Palin — more prominently than Mr. McCain — does not.

“That sealed my decision,” said Ms. France-Kremin, who added that she would no longer consider voting for Mr. McCain.

For our next exhibit, we go to another suburban outpost where a vacant mentality apparently abounds.

Shopping at a suburban mall in Michigan on Friday, Cathy Gates, 40, a registered Republican and a mother of two who calls herself a “football mom,” said that the Palin pick was “a big risk” but that it “makes me feel a little better” about voting for Mr. McCain.

“She does appeal to me,” Ms. Gates said. “You would feel she has the same values as you. Having a child with Down syndrome, and being the governor, and she calls herself a hockey mom. I was impressed. She’s very pretty and seems very smart. I hope it works out.”

Some Democratic-leaning women, as well, welcomed Mr. McCain’s barrier-breaking choice as some consolation after their dashed hopes of having a woman at the top of the ticket.

“I wish the Democratic Party had the courage” to pick a woman, said Kimberly Myers, a retired transit worker in Pittsburgh who supported Mrs. Clinton in Pennsylvania’s primary and said she now planned to vote for Mr. McCain.

Ms. Myers said she also saw a bonus in the choice of Ms. Palin: “The fact that she’s a working mom will send a message to America that you don’t have to choose children over career.”

Pardon me, but there's a county to run here. This should not be about thinking a candidate is cool because she calls herself a soccer mom and you're a football mom. But she's "very pretty" so there you have it.

As word of the Palin choice spread, some women said they were intrigued by what they saw as her unusual mix of last-frontier pioneer and suburban supermom. She is a sportswoman, hunter and onetime local beauty queen who married her high school sweetheart, as well as a self-described hockey mom and PTA member.

But wait. There's more! By the time I was near the end of the first section of the paper I was prepared to breathe a sigh of relief and I ran head-on into Peter Applebome's Our Towns column, and this excerpt made the milk in my coffee curdle instantly.

“I think the guy’s amazing,” Ms. Drury, a registered nurse from nearby Beacon Falls, said on Friday over the low buzz at the Valley Diner in Connecticut’s blue-collar Naugatuck Valley. “I thought he gave a great speech. To be honest, I can’t turn my eyes from him when he’s on. For a 41-year-old, getting-divorced woman, he’s a hottie. I thought he laid out a phenomenal plan and finally told us a lot about himself.”

And whom will she be voting for in November? John McCain.

“I’ve loved watching Obama emerge and evolve, but I don’t vote based on the swing of the fever,” said Ms. Drury, a mother of three who said she thinks of herself as a liberal Republican. “He put out a lot of great words, but we live in a very dangerous world, and I just don’t think Obama’s ready yet. I think he will eventually be a great president, but not yet.”

A liberal Republican, huh? What does that mean exactly? Because from where I stand in the political spectrum, Barack Obama is closer to a liberal Republican than John McCain. Part of the reason we live in a dangerous world is because of the failed policies of President Bush. And John McCain vows to continue trotting down that path. And this "liberal Republican" lives in Connecticut! Wait until we get to some thoughts of the non-so-liberal Republicans in the deep South.

The idea of a member of our armed services not even paying attention is baffling. I suppose that's worse than the tendency to ignore the fact that we have issues facing us.

And then there were the customary wonders of American indifference. Mike Palmieri, 23, is in the Army at Fort Drum in upstate New York and then headed to Afghanistan. You might think he’d have a stake in things, but he said that politics was not his thing and that he was not paying attention. There was the woman who declined to give her name who didn’t know who was running for president.

The person most in limbo seemed to be Geraldine Peter of Ansonia, a Clinton voter in the primary who’s not sure if she will vote for Mr. Obama. She said she would take a longer look at the Republicans with Mrs. Palin on the ticket.

Whatever. This makes me want to cancel my subscription and live in a cave.

A stern editor could have improved the 4,500-word acceptance by cutting a thousand words of populist boilerplate and partisan-pleasing shots that offend centrists. 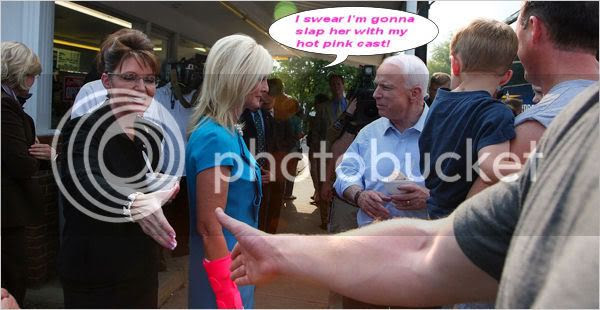