Wow. McCain has gone and done it now. 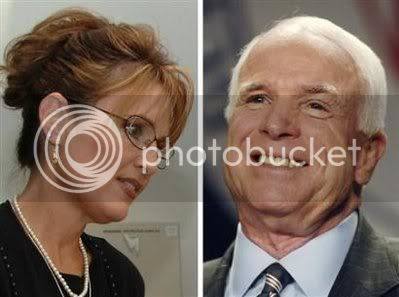 What a clever man. Somebody will make history regardless of the winner. So let's see how many of those Hillary hold-outs are going to be running to the McCain camp now that he had the balls to choose Alaska Governor Sarah Palin as his running mate.

Palin has a strong anti-abortion record, and her selection was praised warmly by social conservatives whose support Mccain needs to prevail in the campaign for the White House.

Great. Just what we need: a woman who wants to restrict the reproductive rights of women.

McCain needs to shut up about Obama's experience now.

In an announcement, McCain's campaign said that Palin, who has been governor less than two years, "has the record of reform and bipartisanship that others can only speak of.

A self-styled hockey mom and political reformer, Pallin was mayor of Wasilla, Alaska, population 6,500, until she became governor.

Again, I'll say wow. The choice in November could not possibly be more clear.


Update: I found this comment in a thread at Pam's House Blend.

If 72 year old McCain can't finish his term, we would have 44 year old Barracuda, two year governor of Alaska and former mayor of Wasilla!

Perfect. Now I can't get the song out of my head...

All we need now is for a hurricane to hit New Orleans during the Republican convention. Get ready for a ride.
Post Author: Friðvin at 11:15 AM