It was on this day in 1990 when my life would change forever. However, at this exact moment 18 years ago I was a single guy still looking for the love of my life. Little did I know, my wait would only be another six hours or so.

I had only been living in San Diego about two months. But I knew I agreed to move there with a friend because I had a hunch I'd meet my soul mate on the west coast. I was getting a little antsy after 2 months because I've always wanted instant gratification.

My mood was so-so as I got ready to go out with my friend to a dance club called Metro in the Hillcrest area. We got there, had a few drinks, I danced for a bit, and then I sat down at a table alone on a dark side of the bar. I was facing a dark wall. I wasn't having a lot of fun. I just sat there nursing my drink until I happened to notice a person standing very close to my table.

I must have looked up at some point to see his face and had eye contact. I looked back down at my beer as my heart began to race. He was cute! And he was standing close enough to touch. His hand was dangling at his side close to where I was holding my beer. I reached over to touch his hand and he did not recoil.

Our pinkie fingers entwined. At that exact moment, I remembered why I moved to San Diego. And I had found what I wanted. 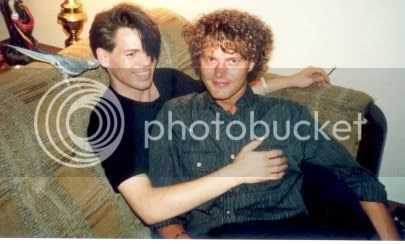 And 18 years later, I'm still single in the eyes of the law. Just thought I'd mention that fact.